Well, there's just one day left until Ed and I close on our house! I can't believe it's finally here. This last month has seemed to drag by.  Today we have our final walk through and then we meet for the closing at noon tomorrow.

Screw the royal wedding, we've got something better to celebrate on April 29th!
Posted by Heather at 9:05 AM 2 comments:

Things are going along on schedule with the house. The appraisal was completed and there was no problem there. Now we're just working on the last bit of paperwork needed by the mortgage company. Every has to be in by this coming Monday and then we close on Friday the 29th. I am so excited. We've been looking at paint colors and making all sorts of plans.  I'm really looking forward to getting out in the yard and planting a real garden this year!  More updates to follow...
Posted by Heather at 4:32 PM 2 comments:

We had our home inspection on Saturday.  The inspector was very prompt with the report and we received it yesterday.  Today we sent our list of fixes to the selling agent. Now we wait to see what the buyers have to say.  It seems like there are so many things we have to hurry and do or take care of, and then we just have to wait, and wait, and wait for a response.  Honestly, we haven't had to wait that long for most things, it just feels like it.  I constantly have a fear that something will go wrong and we will lose the house. Like right now, I'm worried that the sellers won't want to fix all the things we requested or go down enough in price for us to do the fixes.  Deep breaths...
Posted by Heather at 4:19 PM 2 comments:

First of all, can you believe that I've posted twice in one day?

Well, we've come to an agreement with the sellers and we're buying a house!  Of course, now we just have to hope there are no problems when they do the inspection. I'll be keeping my fingers crossed!  I just called the inspector and if schedules allow, he'll be doing the inspection this Saturday.  It's pretty fast, but we're planning to close on April 29!  I am so excited!

Who knew house hunting could be so damn stressful?!  We've been actively looking at houses for the last month or so.  We want to be sure we get a house that is right for us, that we love, and that we will be happy in for many years to come.   We found that house recently but our offer was not accepted. =(

We continued our search and found yet another one.  We made an offer, they countered, we countered, they countered.  After their last counter we decided to walk as we did not feel like playing games.  Our agent let us know this morning that the selling agent sent her an email last night and kind of regretted some of the stuff that was in the contract. So, we have made one final offer. If they take it, great! If they don't, we're walking and then taking a break from house hunting for a week or two.

In the mean time, I'm just trying not to lose it and stay calm. I have a very hard time not getting upset over things and I know this is not good for my health.

Stress, stress, go away!
Posted by Heather at 9:59 AM No comments: 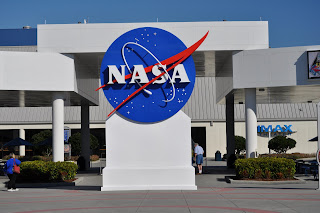 On our third day in Florida we visited the Kennedy Space Center. I really thought this was an amazing place.  All of the exhibits were both educational as well as just plain amazing!  The highlight of my tour here, was that I got to touch an actual piece of moon rock. It was so awesome knowing that I was actually touching a piece of the moon!  We also got a tiny glimpse of the space shuttle Discovery. It was in the vehicle assembly building and we could just see it though the open bay door as our tour bus drove by. 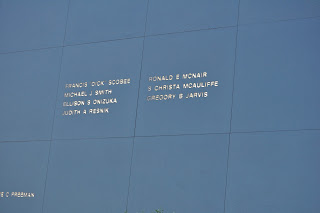 As much as Ed and I enjoyed our tour, it was also a very sad time to visit the center. We visited on January 29th, just one day after the anniversary of the Challenger explosion.  The monuments and memorials to the crew (as well as crews of other missions) were so very moving. It's really hard to explain how I felt. I remembered sitting in 8th grade science class and watching as the Challenger lifted off. 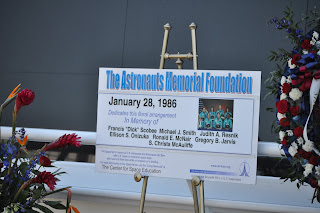 On a happier note, while we were out on the tour that went to the launch pad areas, we got to see some dolphins swimming! That was pretty amazing. We were only able to get pictures of their fins sticking up, but it sure was entertaining watching them. 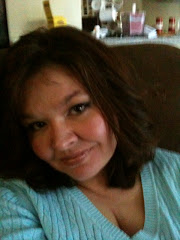